Before we get to the details, a few words about Mountain Crossings.  It's a cool place, you should go there.  And I would know, we spent a Lot of time there.

The folks were nice to us, there was ample hang-out space.  Also, I bought some new boots.  I was actually fitted for new boots.  When I saw that the soles were splitting after we came off Blood Mountain I knew the old Merrel's weren't up to the task anymore.  So I padded into the store in my crocs & the least stinky hiking socks I had.  I felt a little bad subjecting the BootFittingLady to my dirty-self.  She found me a great pair of Keens and sold me some insoles (SuperFeet!) that go inside.  She also told me "oh, by the end of the hike your feet will probably be a whole size bigger"  YESSSS!  If anyone asks ever again, here is why I am hiking:  so that I can buy a pair of shoes that fit without going to the BabySection.


Now, onto the walking.

Top Banana's Dad and Kathleen (TBDAK) dropped me back at Neel's Gap this morning.  I walked up to the porch to sign the Thru-hiker's log and weigh my pack.  The weather report on the board was for highs in the 70's, lows in the 50's and 50% chance of afternoon thunderstorms.  I didn't sign the thru-hiker logbook after all and my pack weighed 30 pounds.  I was mortified.  One of the MountainCrossing employees was walking past at the exact moment I said to TBDAK:  "There's no way this is right, this scale must be wrong".  I'm sure he was thinking "That's what they all say".  I'm sure the scale was accurate. Ugh.

And so with new boots and a tooheavypack I headed up out of Neel's Gap.  The first 20 minutes or so my calves burned and my feet ached as I got used to the new insoles in my shoes (SuperFeet!) and I wondered if this new boot thing was a mistake.  But it got better.  I passed a few people in the morning, including the Australian couple we'd met the day before at Blood Mountain.  When I saw them, they were headed towards me.  "When was the last time you saw a white blaze?" they asked.  "Uhhhh...."  What?  I hate it when this happens.  "We walked down that hill and came to a blue blaze without any other white blazes, we looked around but couldn't figure out where the trail goes..."  I pulled out my map and we decided that we were somewhere..right...about...where all these curvy lines are... After a minute or so of speculation and "AWOL is usually so spot on.." I turned around and saw a white blaze on the tree behind me.  Satisfied we packed up and I headed out first.  At the bottom of the hill I came to a blue blaze straight in front of me and a side trail to my left with no blaze.  There was the faintest ghost of what could have been a white blaze, or a patch of lichen on a tree about 15 feet ahead.  Using this evidence, coupled with the experience I had with the trail at this point--that it usually goes up--I kept moving forward.  It was the right way, of course.  I never saw the Australians again.


I passed CowRock Mountain and moved to the "other side of the map".
At the bottom of Cowrock mountain I came to my first Trail Magic--a guy named King Tut had set up a tent at the road crossing there (Tesnatee Gap).  I had a coke and some Cheetos and only minimal proselytizing.  The sky was getting dark and I was worried about being caught on a ridge in a thunderstorm.  I headed out (or straight up) of Tesnatee Gap.  I crossed Hogpen Gap and saw some more trail magic but left it behind. 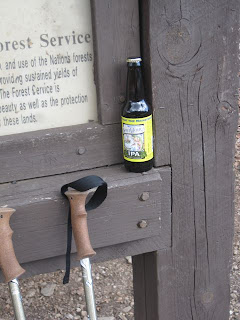 Had a quick walk over a ridge for a while--trying to outrun the storm that I could hear behind me.  After a few hours I pulled into Low Gap Shelter where I had some cheese and crackers with the folks there.  I met Roadside, Candace, Swinging Jane, Stats, a few other folks whose names I can't remember and Preacher-man.  About 4 I decided to move on.  On the way to Blue Mountain Shelter I passed the couple we'd been leap-frogging with and the other folks we'd camped with at Jarrad Gap.  I was tired and my pack was heavy but it was only 5 and I didn't feel like stopping so I moved on.  About 5:30 I had a break on a rock and Preacher-man caught up with me.  He sat down to have a cigaratte.  He was carrying a gallon jug of water, a 30 year old pack and was wearing jeans.  Not exactly typical hiker garb.  "I wish she would just wire me money so I didn't have to wait for a package".  I started stuffing food in my mouth so I couldn't possibly participate in this conversation.  "I mean, really, she should go to Walmart and get me a debit card so I can just buy what I want".  I don't know who She is, I didn't ask.  I got a bit creeped out, sitting there with my nice-gear and full food bag with a buy bemoaning his lack of money.  "I'm getting cold, see you"  and I took off.  Walking even faster now to keep the storm and creepy-man behind me.

After I left Creepy-man behind I still had 4 more miles to Blue Mountain Shelter.  I was already tired and was after 5 o'clock quittin' time, but I had my heart set on the shelter and I still had plenty of daylight.  Then I met these rocks.

Miles and miles of these horrible rocks (ok, it was like 1 mile of rocks). 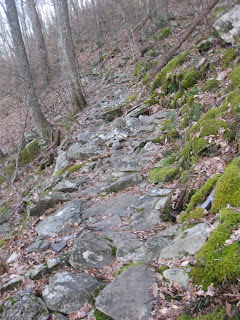 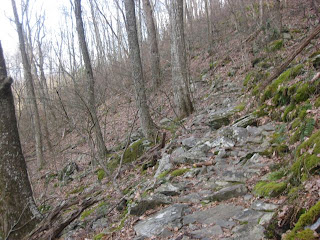 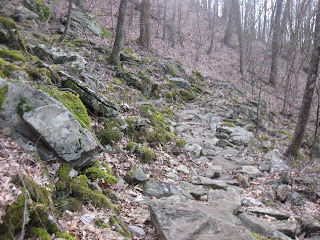 They were much worse in person.

I rolled into Blue Mountain Shelter around 7:30pm.  There was a group of folks there that recognized me.  "Hey, you're the Girl Scout.  Where's the kids?"  I told them that the kids had to go home because, you know, School.

"We heard you got all your food stolen last night".

"No, that was everyone else, my scouts are professionals."

I made dinner and sat and waited a while for my alcohol to burn out (because I put waaaay too much in my stove, I hoped no one noticed).  Inside the shelter they were trying to decide whether or not they would get Hanta virus from the dust in the corners.  Conversation turned to Creepy-man.  I happily intruded on their conversation to inform them that I'd passed him and relayed that he was planning to make camp a few miles before the shelter.  There was a collective sigh of relief and I was glad that I could bring good news.

I set up my tent just outside the shelter and hung out for a bit listening to the Best Friends Club talk about all their plans for the future together.  The way they joked with eachother and leaned in shoulder to shoulder over the topo discussing elevation and mail drops I was certain that they were friends from Before the Trail.  "So, how do you all know eachother?"  The girl who was making a pair of flip flops out of 6 inches of ratty string and a couple strips of duct tape looked up "Oh, we met up at Hawk Mountain".   I guess the trail gives some folks enough common ground to form immediate families, but they were a few days ahead of me--I just lost my trail family.  I knew that over the next couple days I'd figure out who would be in my crew.  It depends on who you keep pace with and who isn't too creepy.

I hung my food and went to bed.  Had a nice phone message from one of my Scouties wishing me good luck.